When planning where in Christchurch the characters for my books should live, I made sure at least one lived in the village of Burton. That character is Danny Clarke. You enter Burton just a mile from Christchurch and it sits mostly within the boundaries of Stony Lane, the road north from Christchurch to Ringwood, and Salisbury Road. The two roads converge a further mile away at Jopps Corner. The village today is home to some 4,200 people. In Danny’s time, in the 1780s, it would have been just few dozen as the population for Christchurch as a whole, according to the 1801 Census, was just 265*. 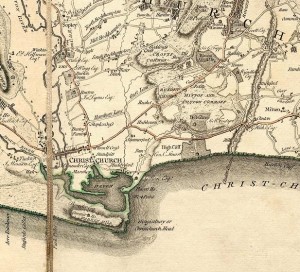 Early records of the village are difficult to come by, mainly due to it being part of Christchurch. According to an excellent booklet**, produced by Christchurch History Society and written by Ian Andrew, there have been several different spellings over the centuries, including Bereton in 1100, Buriton in 1236**. Like Christchurch, the village was in Hampshire until 1974.

Ian Andrews’ book concentrates on houses along Salisbury Road, but if you wander around the village there are almost 20 ‘chocolate box’ thatched properties and several beautiful 18th-century houses, including The Cedars (private residence), Burton House (now flats) and Burton Hall (mixed apartments and cottages). There have been some notable residents, including the poet, Robert Southey, John Rickman, who suggested a national census and paved the way for the first Census in 1801 and Lord Lyons of Christchurch. 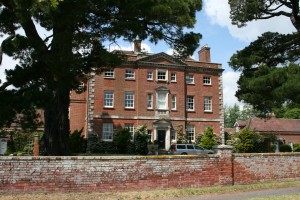 I imagine Danny living somewhere around Martin’s Hill in a house similar to the thatched properties close to the Oak Inn. In The Thirteenth Box, Danny walks home from a visit to his Aunt and Uncle in Hinton, he attends the free grammar school in the Priory and walks to and from home via Purewell. He also walks to the beach, all walks we are able to do today. In The Face of Sam I introduce a family into Burton Hall and I was lucky to be invited into one of the apartments to look around and get a feel for the building and its rooms. This meant that Burton Village featured more in this book than the first, in fact a funeral procession takes the reader from Danny’s home along Salisbury Road passing the Hall and out to Sopley.

Using my home village as a setting in my books allows me to imagine, as I take my daily walk along its footpaths, what it would have been like 235 years ago and weave this into the texts; something of a tribute to a special little place that has been my home for 35 years.

*A vision of Britain through time, URL: http://www.visionofbritain.org.uk/unit/10056834/cube/TOT_POP