Julie had a great time working with Year 8 students at Highcliffe School following a recent visit to the school.

She presented workshops dealing with scene setting. The students heard about choosing real or imaginary places for their stories and how to make them come alive for their readers.

In two separate sessions pictures were used to describe scenes and these were developed over three tasks into a piece of work.

“The students were very attentive and asked some great questions,” said Julie. “At the end of the sessions they were eager to share their writing and I was impressed with both the standard of writing and how they had grasped the ideas I’d put to them.”

Julie will present the workshops again later in the year. These were scheduled for World Book Day, but were postponed due to bad weather. 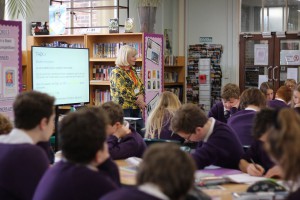